I can’t claim that my ideas are high art. I can’t even claim that they’re funny. But that doesn’t stop me from chasing after my own weird sense of humor. Case in point, this personal photo shoot.

I had the idea of shooting an icon as he’s never been seen before. Superman usually conjures images of bending steel, fighting off space aliens, and flying through the clouds. But what does he do when he gets home from all those hunger-inducing activities? Presumably, he has a super-appetite. And…well, yeah. You can see how my brain works.

It all began with a bad storyboard. 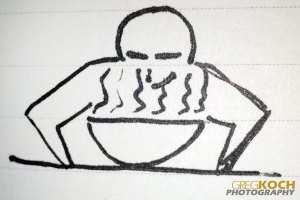 There were several moving parts to this shoot I needed to tackle before pulling everything together. First, I needed a costume. A quick stop at my local Amazon store and I walked away with an Under Armour Alter Ego Compression shirt.

The next item on the shopping list was a location. I searched far and wide for an appropriate kitchen setting, but it wasn’t until visiting an online photo group that I learned of The Producer’s Loft (www.theproducersloft.com) in San Francisco.

Finally, I needed soup. Sure, I could have added everything in Post-, but it’s much easier for me to do it in camera. A quick trip back to Amazon and I loaded up with 390 cans of Campbell’s classic Chicken Noodle. In hindsight, I probably should’ve done some of it in Post-…. 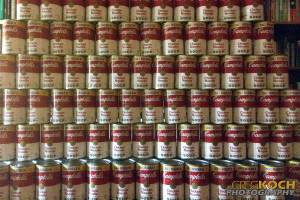 We arrived on set early because I knew it would take a while to set up all the cans. We all pulled double-duty, taking turns stacking everything neatly, messing it up, then restacking it all. In the end, the set looked pretty good. I wouldn’t have minded another 2000 cans of soup, mind you, but I think we rocked it with what we had. 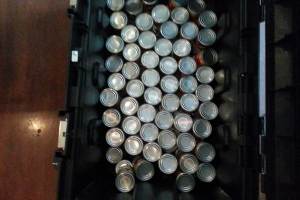 I instructed our model, Enzo, that he was not so much portraying Superman as he was portraying Clark Kent. The idea was that Clark, back in his bachelor pad, was making dinner. Superman is who Clark is when he’s performing. Clark is who he naturally is, hence we only have a hint of his costume. Superman is perfect; Clark, on the other hand, can afford to be messy.

Personally, I’m far more interested in the human side of superheroes than in their super sides. I don’t much care that they can fly and shoot lasers out of their eyes; I want to know how they interact with people on the street, how they drive cars, work at desks, and make food for themselves. 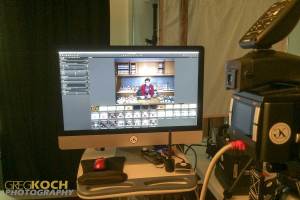 I can’t tell whether I’m having too much fun or not enough. 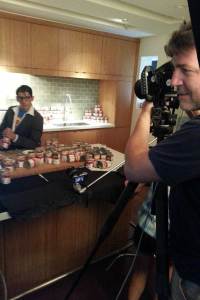 Interesting things going on behind the scenes or are they just ignoring the model? 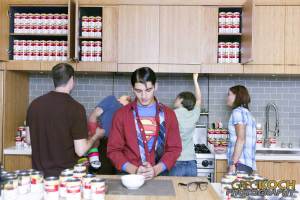 Actually, we ended up balancing the strobes for the tungsten lamps built into the kitchen set, the reason being that the small tungstens had a lot more character than the big flat strobes. Could I have lit everything with strobes to match? Probably, but it would’ve taken a long time and quite a few more lights. Most of the time, the easy answer is the best one. So, in the photo above the crew busies themselves changing bulbs and applying gels.

Another walk around the set gives us Soup-ception! 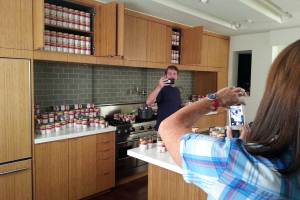 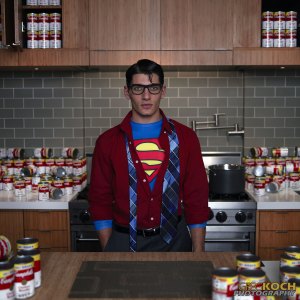 Next, the taste test: 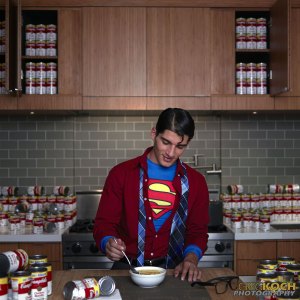 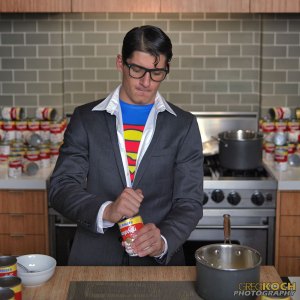 Winding down with a full belly. Fortunately, Souperman never gets bloated. 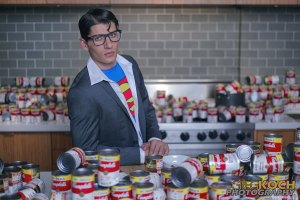 And the final image: 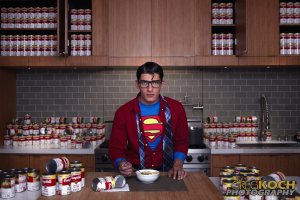 When we wrapped, I gave the soup to a local food bank.  Pay it forward, boys and girls. That’s what Souperman would do!

A big THANK YOU to several folks: