FarmMa: Portraits of Women and Mothers in Agriculture

[NOTE: In between jobs, I’m always looking to fill my calendar with personal work.  This blog has generally become an ode to that approach.]

Here in the hills of northern California, I’m surrounded by farms and ranches.  Many of them are small businesses, raising poultry and livestock or growing grapes for local markets.  Many of these properties have a unique beauty seldom seen in wide-ranging publications.  And, perhaps surprisingly, access to these venues is generally as easy as a phone call and a handshake.

So, when I was looking for my latest personal project, it was a no-brainer.  I already had the doodles, and had been playing around with creative titles and bad sketches.  (I often work on projects backward—coming up with a title, then fitting the images to its theme.)  Thus, “FarmMa” was born.

One of my regular casting agents and a good friend, Toni Staniewicz, suggested several people she knows who own land.  Our first stop brought us to Phoenix Ranch, a veterinary outreach facility in Vacaville, CA.  Our talent for this location, Dr. Susan Chen, owns and operates the place, rehabilitating animals and teaching humans to bond with them.  A more empathetic soul you’d be hard-pressed to find.

Our first setup was in the barn with one of Dr. Chen’s Icelandic Ponies.  The animal was content to stand on its mark, allowing us ample time to play with the lightning and the set. 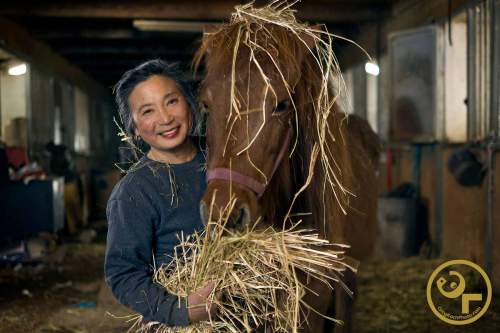 Eventually, we moved into the stalls to shoot a family of cows, including large bull, its young calf, and the calf’s mother.

Later, we moved to the duck pond, where we broke out the bread crumbs and the bubble machine.  Because nothing says “Save the animals!” like ten thousand bubbles blowing across the backs of wild turkeys. 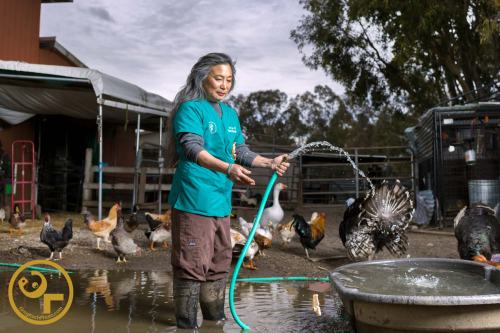 Our final setup at Phoenix was in an irrigation ditch Dr. Chen was digging.  She was game enough to get right back into the mud and manure for our photos.  This is what we call suffering for our art!

Did you know that wild turkey heads have the same texture as a bowl of blackberries?  Here I am, flanked by my bodyguards.  In truth, they wouldn’t leave me alone.  I believe that makes me an honorary turkey.  (My wife would probably agree.)

And here I am vetoing Thanksgiving on behalf of my new brethren.  Note the bubble juice in the background. 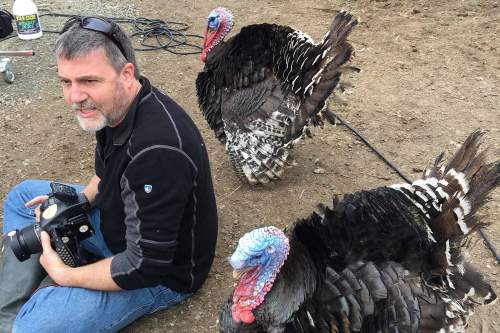 After saying our goodbyes to Dr. Chen, we moved to a secondary location, a private property just down the road.  Our talent this time was barrel racer and animal aficionada, Andrea Garcia.  Ms. Garcia has lots of animals, including horses, cattle, dogs, and birds.  I was intrigued by Ms. Garcia’s laidback approach to her otherwise unusual lifestyle and wanted to photograph her in her element.  We decided to use the property itself as a backdrop rather than the animals, and so we shot first in the barn, atop some old hay bales that were waiting to be mulched. 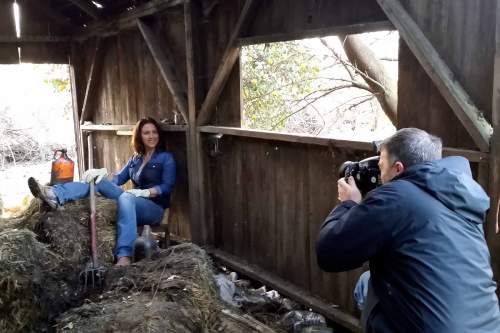 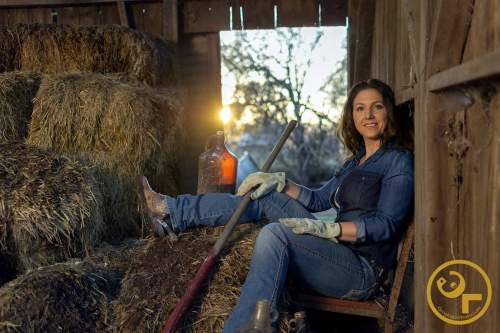 Afterward, we headed out into the field with our rubber boots and climbed atop the old tractor that keeps watch over the horses in the field. 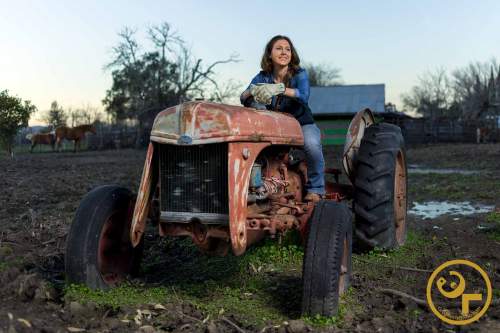 It was a breath of fresh air, getting out of the city, out of the office environment, and into nature.  I could see the relaxation in the faces of Ms. Chen and Ms. Garcia, and while we easily could have continued shooting, our day was quickly over.

I know this project will grow over time, and that these are only the first couple of tests.  And if I’ve learned anything, it’s that there are many voices in this industry that often go unheard.  My hope is that with the FarmMa project, many of those voices will speak to those who might not otherwise have been able to hear them.

P.S. My thanks to cast and crew for all the hard work and crude animal jokes!