When I received the call to shoot Vernon Davis for a local company’s new ad campaign, I didn’t hesitate. As a child, I used to sit on the floor watching the Niners (Montana, Walsh, Clark, et al), and it seemed fitting that I could now come full circle, working with a player from an organization I’ve long admired.

I was given two instructions: shoot him high-key and shoot him low-key. Other than that, it was up to me. Are you kidding? Freedom to play with a top-tier athlete?

For the sake of expedience, we decided it best to rig both a white seamless and a black Duvetyne in separate areas of the studio. That way, Mr. Davis could simply step from one setting into the other without having to wait while we re-rigged the lights. This ended up saving us a lot of time and is now something I try to do whenever possible.

When Vernon rolled in a few minutes later, I could instantly see that he was charming, energetic, and fully committed to our shoot. I was so excited to get started that I had difficulty allowing our stylist, Lisa, the necessary time to prep the subject. But good things come to those who wait.

As with all my sessions, there’s a certain time required for me to get to know the subject, and vice versa—at least as well as we can. Is the subject friendly, introverted, gregarious, somber, etc.? And does his/her personality naturally mesh with mine? It’s a little dance that happens every time, and the key to a successful session, I’ve found, is to key into your subject and to be what he/she needs you to be at that moment. If we don’t get a good shot, it’s never the subject’s fault. That responsibility lies with me, and so the more I can learn about who’s staring down the barrel of my lens the better. Now, all that said, I can’t claim that I got to know Mr. Davis and better than I know any of my other subjects. But I did learn a few important things:

*After about my fiftieth exclamation of “Dude, you look great!”, Vernon took a deep breath and let me know in a very gentle voice, “…you gotta stop calling me ‘Dude.’ ” He said it with a smile, which helped, but for the rest of the session I struggled to come up with something appropriate. Apparently, I need to expand my vocabulary. “Bro”? “Man”? “Grand Master D.”?

Stunted verbiage aside, we progressed through a series of wardrobe changes, each from Vernon’s own closet. There are pros and cons to working with a subject’s personal attire. On the one hand, Vernon looks good in everything he owns, which ensures that we won’t get a bad photo. On the other hand, he looks good in everything he owns…so it’s more difficult to eliminate choices. After all, we didn’t have an unlimited amount of time. As usually happens, I followed my gut. The first pick is most often the right one.

We were fortunate to have some props on hand, as well—a football and a briefcase. You might not think those two would go together so well, but you’d be surprised. Vernon pulled it off.

Now, you should know: Because I’m just kind of twisted, I always like to mess with my subjects a bit. Sometimes I’ll ask for a serious look, then do or say something designed to draw a chuckle. It’s an old photographer’s trick to break the ice. But I’d met my match with Vernon, and now that I look back on it, this doesn’t shock me in the least. When you consider who Mr. Davis faces off against daily, both on and off the field, it stands to reason that his ability to remain composed at all times must be supercharged. My best (or worst) jokes bounced right off him. He kept cool, kept calm, and kept delivering shot after shot. 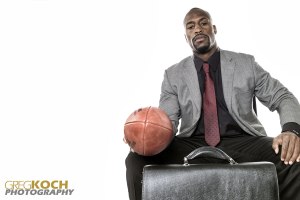 If you ever have the opportunity to meet or to work with Mr. Davis, you’re in for a real treat. But make sure you bring your A-game and, whatever you do, don’t call him “dude.”

Thanks go out to everyone involved. Without a great cast and crew, none of this would’ve been possible.